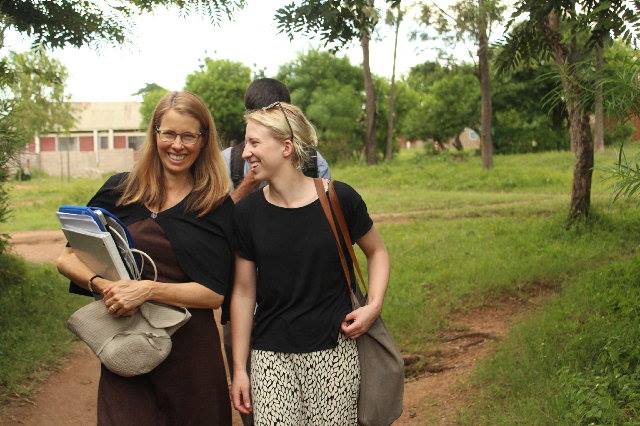 When Dr. Beth Osnes and I began to think about taking our Vocal Empowerment program outside of Starfish: Her Infinite Impact (the organization in Guatemala where we co-developed it over the past three years), we realized that it would not be the best fit for just any organization. Consequently, we began to construct a list of “Key Requirements” that an organization must have in order for the program to flourish.

We came up with four traits:

1. The organization has a mission of long-term engagement in a community.

2. The organization is run with the guidance of local community members.

3. The organization shows an ongoing dedication to the concerns of girls and women.

4. The organization is operated with a sense of joy and play. 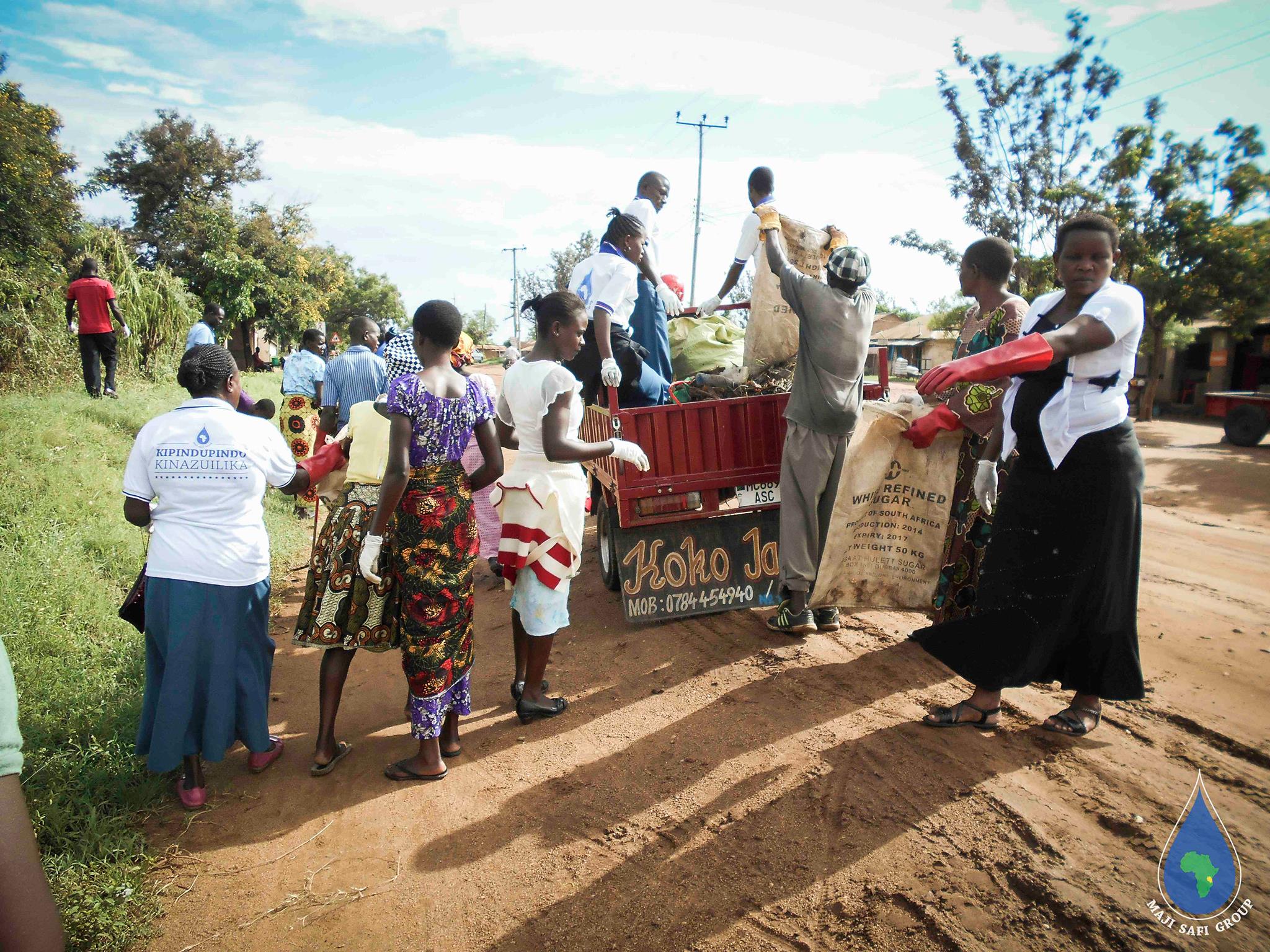 From reading many of Maji Safi Group’s blog posts and speaking with the leadership team, it became readily apparent that their organization meets the first two requirements immediately. While Maji Safi Group continues to be responsive to pressing health needs, such as two cholera outbreaks within the last year, it has a longer mission of improving health – something that is not done overnight. Maji Safi Group’s Community Health Worker (CHW) model ensures that the knowledge gained comes from within the community, and the majority of the employees will remain in the area to spread that knowledge throughout the region – unlike many aid organizations that primarily employ foreign workers. 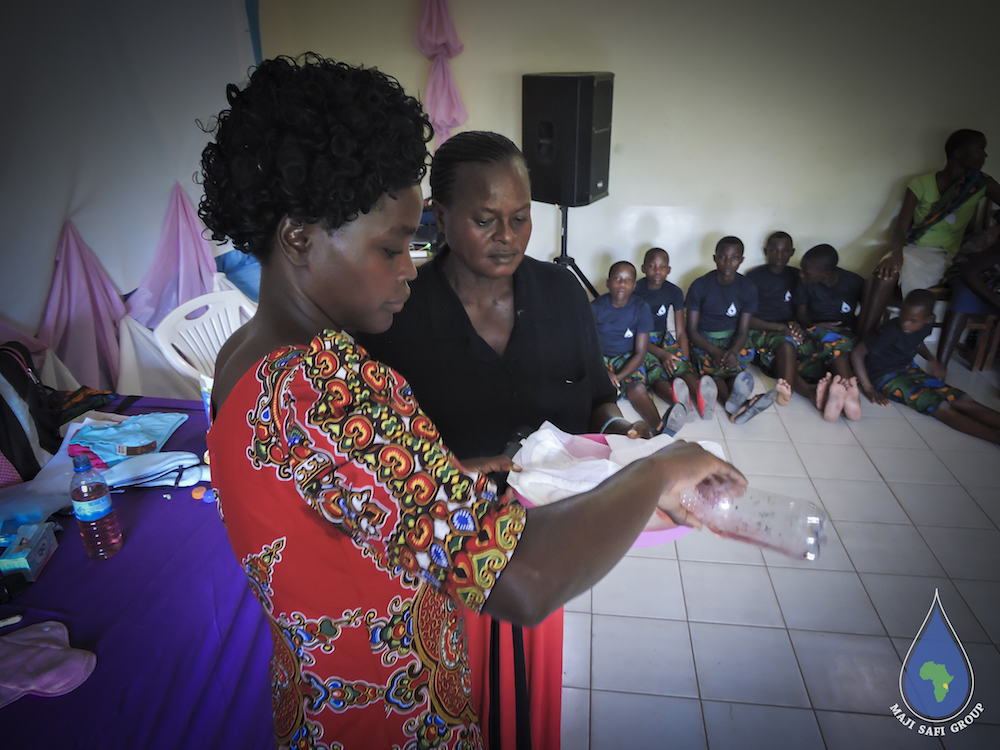 The third requirement is more nuanced and not always easy to find in organizations. However, after speaking with Maji Safi Group’s Female Hygiene Coordinator, Linda Arot, we realized immediately that it was present. The Female Hygiene Program, headed by Linda and CHW Judith Mbache, is a living example of Maji Safi Group’s dedication to the girls and women of the Shirati community. Their knowledge of the unique challenges facing girls in their community and their larger goal of improving public health guide their weekly meetings. Linda and Judith are two women who are clearly concerned with the physical, emotional, and spiritual well-being of the girls they work with, and their program is a wonderful match for the Vocal Empowerment program. 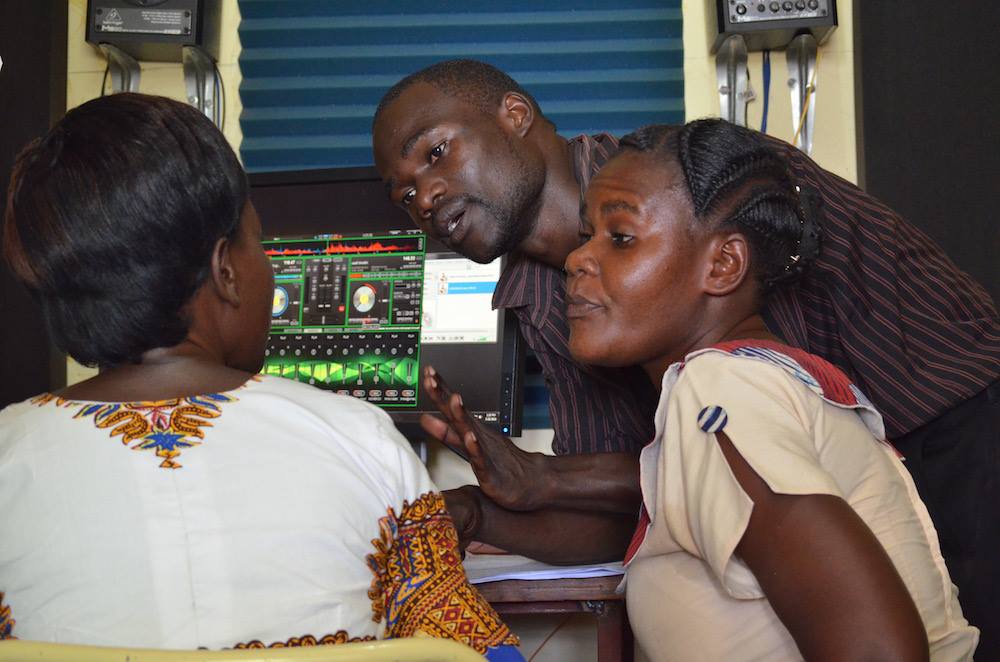 Linda (left), Freddy (back) and Lilian (front) at Rorya FM doing a skit for listeners

This was demonstrated when we were in Shirati with a radio show that Linda, Judith, Freddy and Lilian presented to the community, telling the story of a young girl struggling with menstrual hygiene. They were able to engage various call-in listeners in a conversation around menstrual health – all to ensure that girls are informed and able to reach their goals without menstruation as a barrier. 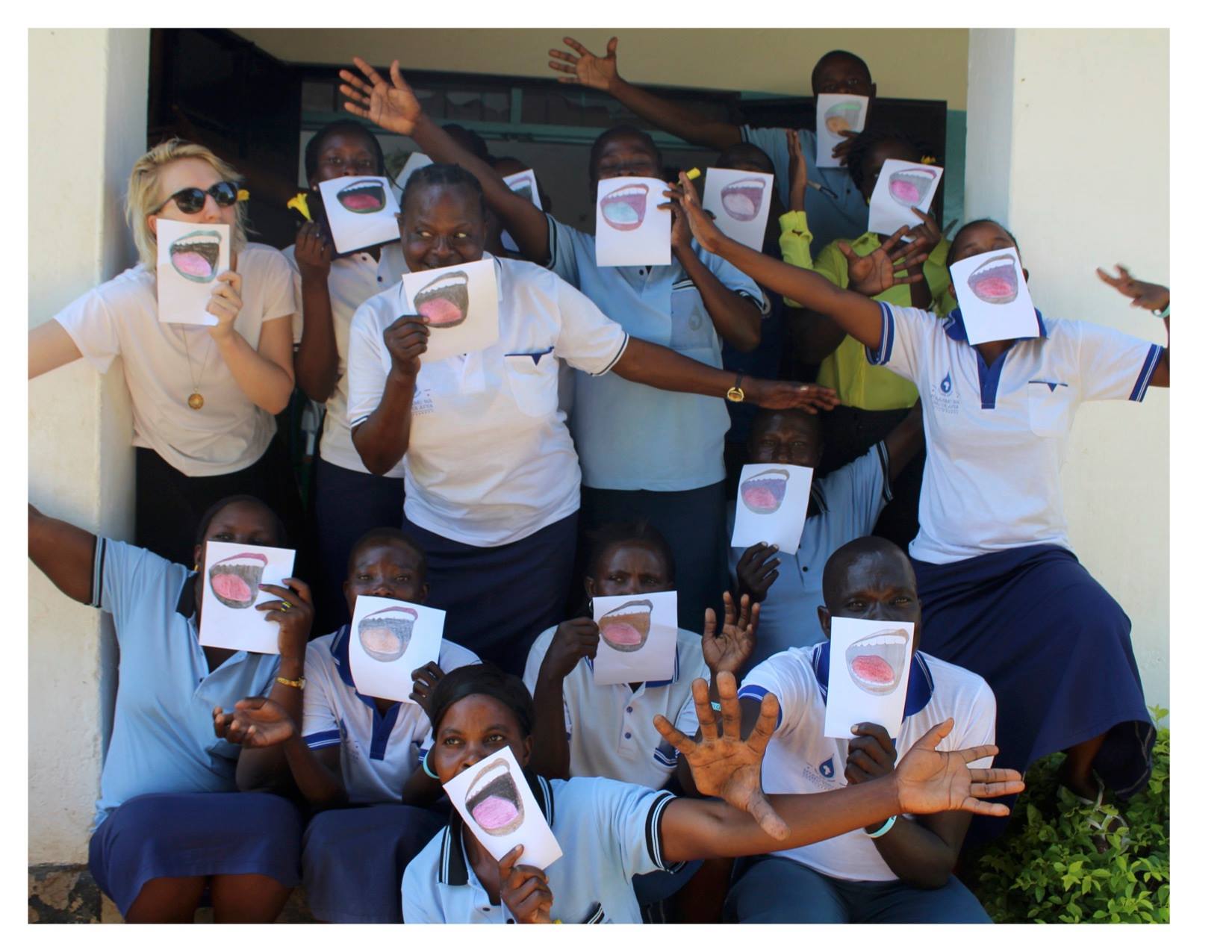 It was the fourth element that Beth and I were not sure of until we arrived in Shirati. Joy and play are intangible things in many ways. It is hard to quantify the amount of happiness, laughter, and energy employees bring to their work. Organizations do not often give data reports on the playfulness of their staff. This last element was something we would need to chance by trusting that Bruce’s assurances that the CHWs were true. 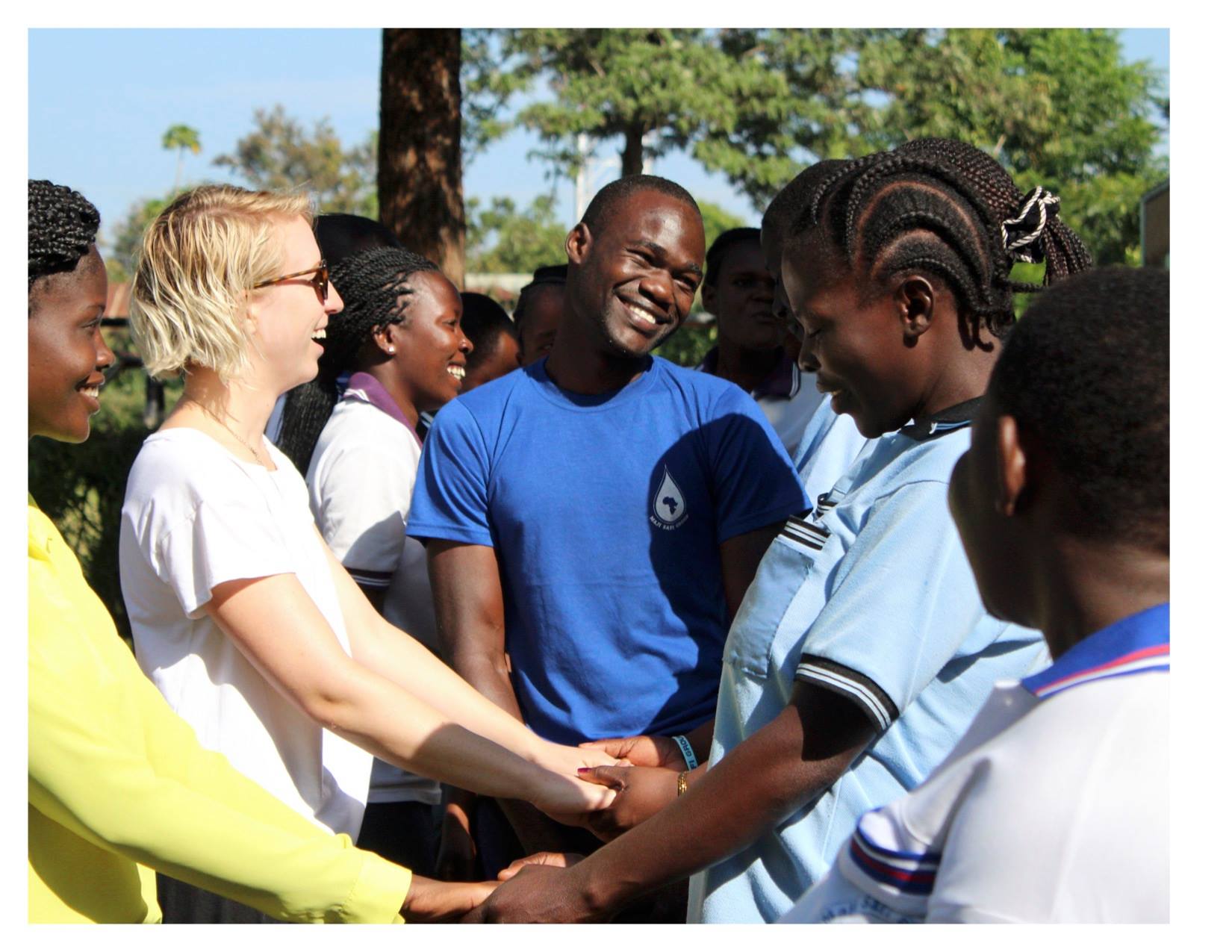 To our relief, surprise, and glee, Maji Safi Group not only runs with a sense of joy and play, but in my opinion, they could not succeed without it. From our first meeting with the Community Health Workers where they sang the songs they have created about various public health issues, it was clear that this intangible element was abundant in their incredible group of vibrant, excited, and eager individuals. We spent the next five days, from 8:30-4:30, learning just how much fun it was to work with Maji Safi Group. 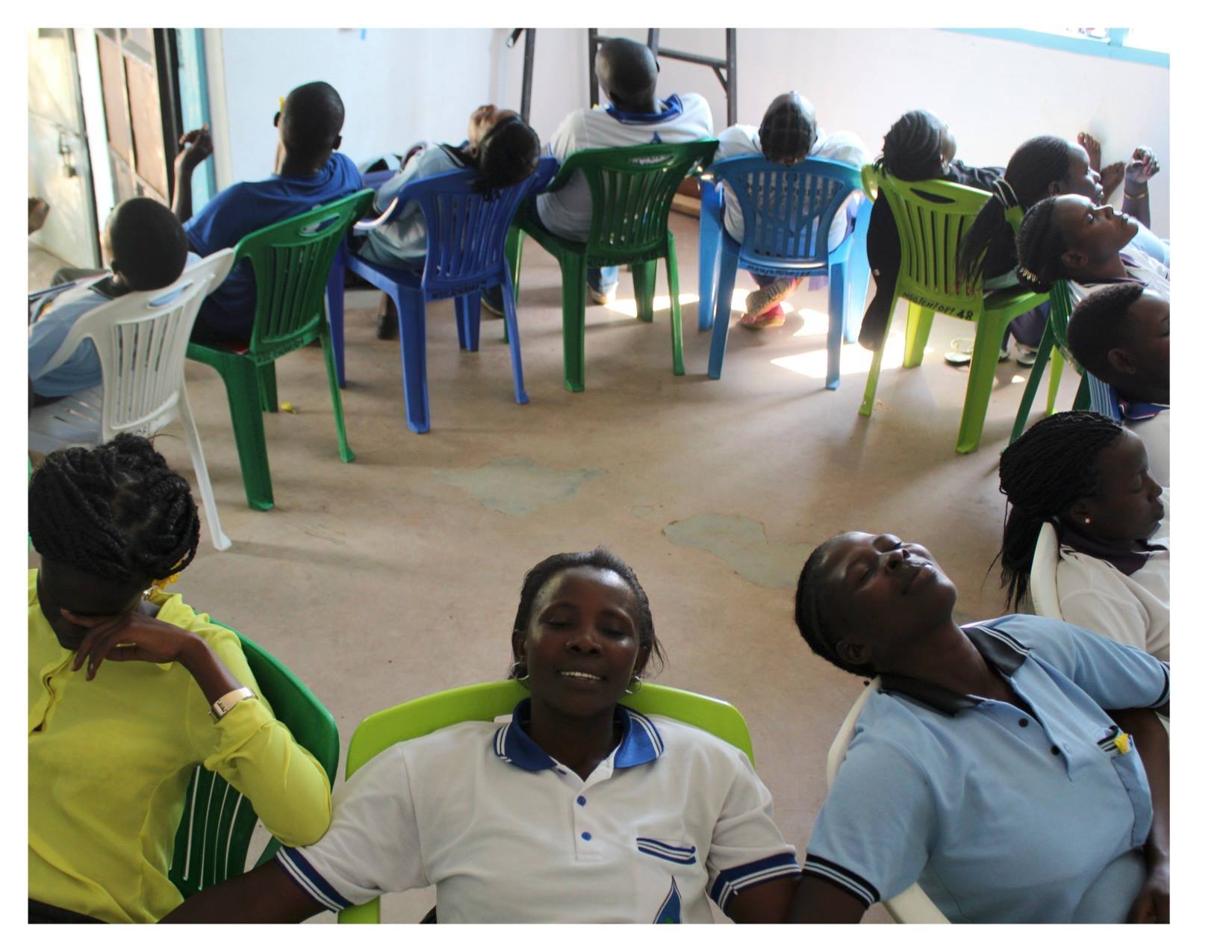 Each day, we trained the Community Health Workers in the various theatre games and exercises that make up the Vocal Empowerment program. From the outside, these games may appear childish or silly, but each of them is selected and intended to open new spaces inside of individuals and groups in a way that being “well-behaved adults” never could. Luckily, the Community Health Workers saw the intention behind the games and understood their importance immediately. They gave 100% of their energy to anything that we threw at them, from keeping three balls thrown in a pattern around a group to running a slow speed race. Throughout the course of the week, the games and exercises became more public and gained higher exposure. This mimicked the same model we use in the Vocal Empowerment program. I like to think of it as slowly practiced embarrassment. The more comfortable you are with being silly or doing something surprising (to yourself and others), the better able you are to do serious things that surprise, that alter, that change the normal patterns of behavior. Maji Safi Group’s work is about changing the status quo, about altering the standard actions of a community to collectively improve health. And while they may not seem connected, the more comfortable you are getting outside of your comfort zone through a game, the more prepared you are to introduce a new concept to those around you.

The Community Health Workers’ expertise in “mastering embarrassment” was demonstrated when we journeyed to the main road in Shirati to do our daily vocal exercises. These are, by any measure, outside of normal street behavior. They involve various vocal and physical warm-ups that performers and those in vocal therapy use to better prepare their voices for speaking. In the Vocal Empowerment program, they serve the ongoing purpose of helping young women prepare their physical voices to advocate for themselves and their communities. When done in a public setting, as we did by the road, they also involve that element of exposure that ensures stepping out of your comfort zone. The group of Community Health Workers, while nervous, gave the exercises their all. They were able to handle the perplexed looks of community members and the gawking of small children. In the end, they even had fun! 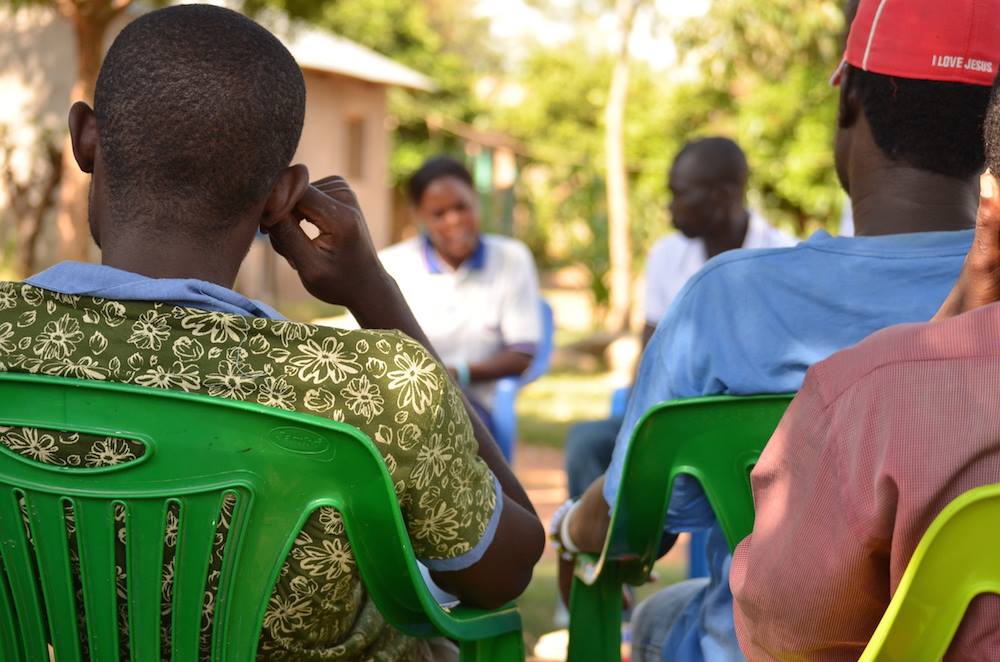 By the end of the week when we were ready for a public sharing of short “dilemma scenes” they had created, it was clear that the CHWs were masters of public engagement, conquering embarrassment, and keeping the energy high. They performed four scenes as well as several public statements and songs we had rehearsed. No one showed any nerves or anxiety. They were eager, calm, and focused as they shared their work with the community. Beth and I were now 100% certain that we had found a perfect partner for the Vocal Empowerment program. In fact, the final moment of the show demonstrated that we had more to learn about joy from Maji Safi Group than we could ever have imagined. 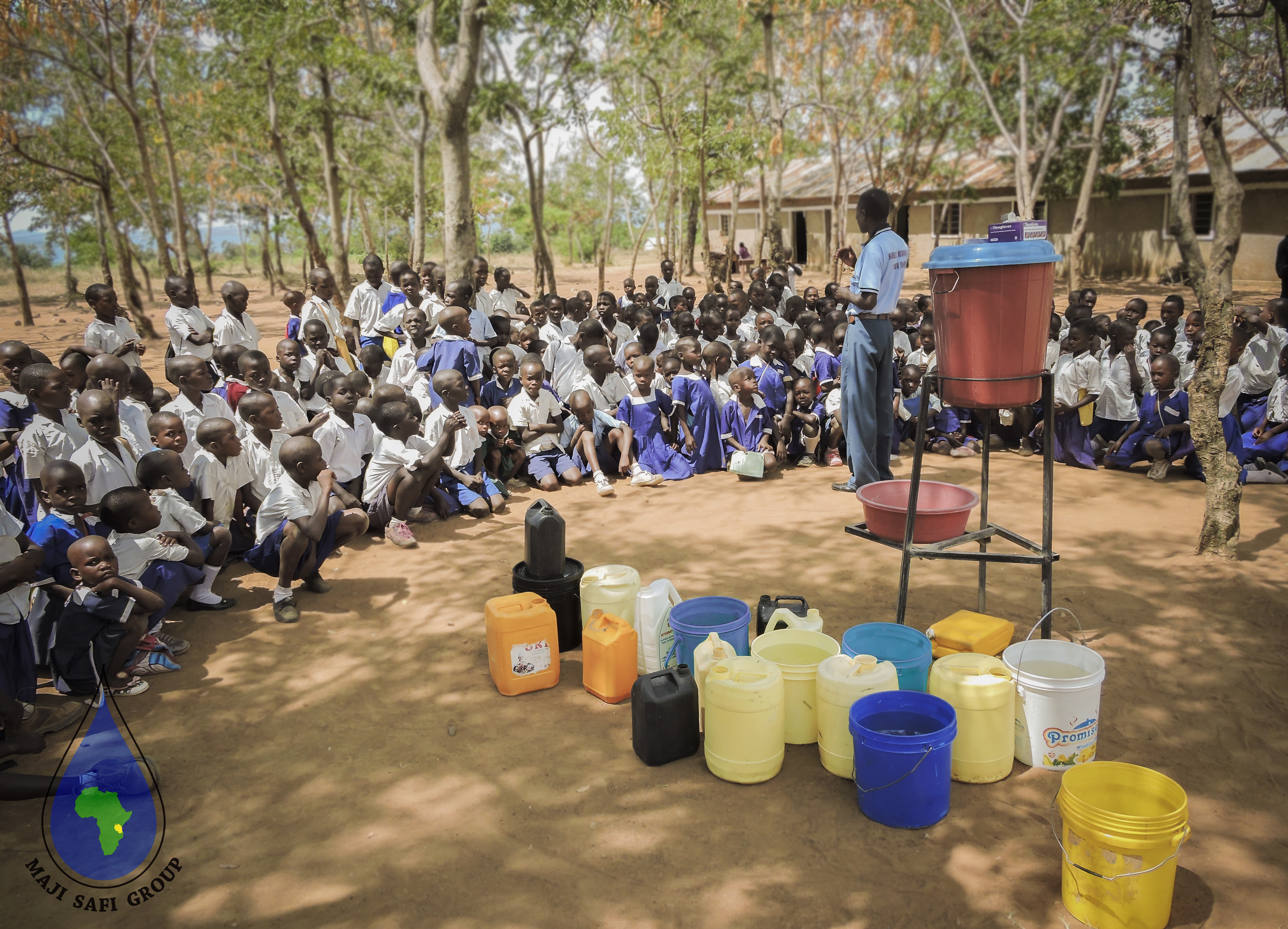 After ending the rehearsed show, Jared Ongati gathered the entire audience into a circle. He asked everyone in attendance, from the children who had been lying in the grass to the older community members who had been resting in the shade, to join the Community Health Workers in one of the vocal exercises: the wave. In this exercise, one by one individuals go from touching their toes to bringing their arms into the air while traveling from the bottom to the top of their vocal range. Once the first person has hit the top, the next person can begin. Altogether, the result is a wave of sound and motion that moves around the circle. As Beth and I waited for our turn, we knew that Maji Safi Group thrives on infusing even the most somber of topics with joy, life, and energy. Their work will continue to touch the hearts of the community and make a widespread impact on the health and well-being of Shirati. I believe it is so because they are able to approach every challenge with wide smiles, laughter, and love.